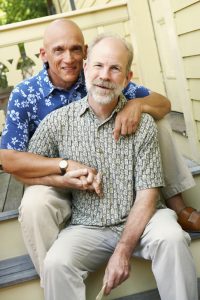 Until very recently, same-sex marriage was illegal in most states.  The reality is, same-sex marriage and LGBTQ couples are still considered taboo or immoral by many. While the law may have changed, the personal beliefs of many, still have not.  So, even though same-sex spouses may now have a protected right to inherit from each other, the social stigma with which they have lived for years still exists.  In some unfortunate cases, families have disowned or ostracized members who are openly gay. Therefore, without proper estate planning, LGBTQ couples may continue to be disinherited, despite now being allowed to legally marry. For these reasons, estate planning advice for LGBTQ couples is still necessary.

Not all LGBTs want to get married

Another reality is that, like many heterosexual couples, there are gay couples who do not actually want to get married.  Without a legal marriage, a gay partner is not considered an heir.  Yet, it should not be necessary for couples to get married simply to be able to inherit from one another.  Because we never know when our last day will come, it is important to plan for the future with an estate plan, regardless of whether or not marriage is on the horizon.  Creating a will or a trust allows you to choose how your assets and personal effects will be distributed upon your death.  Remember, estate planning advice for LGBTQ couples can be very useful.

In most cases, the hospital or another healthcare provider will defer to the decisions of the legal spouse.  Yet, that automatic deference is not guaranteed with same-sex spouses.  With a power of attorney, you can make your intentions clear to the world by authorizing your same-sex spouse to be in charge of those difficult decisions, should that time ever come.  That is true regardless of whether you are married or not. Our lawyers have useful estate planning advice for LGBTQ couples.

It is easy for heterosexual married couples to take for granted many of their rights and privileges in our country.  For example, there is no question that a husband can visit his wife in the hospital and make decisions regarding her medical care if required.  However, these same rights are not available to all gay couples.  In 2014, only 32 states and the District of Columbia have legalized gay marriage.  California joined this number in June of 2013.  However, there are still issues that unmarried gay couples face, including in the area of medical care. Our lawyers are ready to give estate planning advice for LGBTQ couples to help you deal with these issues.

Download our FREE estate planning worksheet today! If you have questions regarding estate planning, trust contests, or any other trust administration issues, please contact the Schomer Law Group either online or by calling us in Los Angeles at (310) 337-7696, and in Orange County at (562) 346-3209.