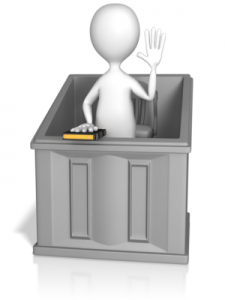 Are you worried that your children will be fighting over your possession after your death?  Even if you have a will in place, there is the possibility that some of your heirs will contest the terms of your will if they feel they are not getting what they deserve.  Self proving wills may be the solution.  A self-proving will can eliminate the need for witnesses to testify in court about the validity of your signature.  In other words, the Court can assume that the will is valid, without a lengthy court proceeding.

Proving a Will in Probate Court

Whenever there is a dispute regarding the validity of a contract, for example, the individuals who executed the contract, and whose signatures are on the document, can be required to take the stand and testify as to whether or not their signature is genuine. However, a will is different.  Since a will does not have any legal effect until the person who signed it has died, it is not possible for the person who executed the will to testify as to their signature.

What does the witness of a will attest to?

Witnesses are critical to proving the validity of a will. Once the will maker passes away, and the will is submitted to the probate court, the court will require testimony from two adult witnesses regarding the following:

Witnesses can provide testimony to the court in two ways: either in the form of live testimony in court, or in a sworn written statement signed in front of a notary public.

Witness requirements for a self-proving will

In most states, the written statement of a witness, attached to a self-proving will, must be notarized (signed in front of a notary public), who also signs the document and includes her official seal. A few states allow witnesses to sign a statement “under penalty of perjury,” which negates the need for a notary to be present.  In most cases, witnesses sign the self-proving affidavit at the same time they sign the will itself, immediately after watching the testator sign it.

Not all states recognize self-proving wills. For example, in the District of Columbia, Maryland, Ohio, and Vermont, executing a self-proving will is not an option. In California, Indiana, and New Hampshire, a separate affidavit, signed by the witnesses, is not required. Instead, the will itself can include a statement that under penalty of perjury, the witnesses state that to the best of their knowledge, the testator was old enough to make a will, mentally competent to do so, and not under undue influence.  So, in California, that is sufficient to make a valid self-proving will.

If you have questions regarding self-proving wills, or any other estate planning needs, please contact the Schomer Law Group either online or by calling us at (310) 337-7696.