Home » Article » What is a Closely Held Business? 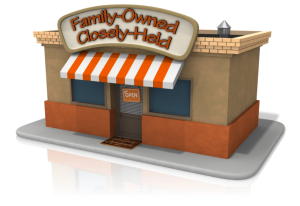 The legal definition of a closely held business

When a business is considered “closely held,” it means that the company stocks that were issued, are held by a limited number of stockholders.  Those stockholders are usually family members or at least have a common interest in the company.  The stocks of a closely held business are not traded in the public stock market.  Unlike publicly traded companies, whose stocks are traded publicly because there is already a market for those stocks. In other words, the shares for a closely held businesses are very unique, so there is no demand for them, meaning there is no existing market.

What types of companies can be closely held?

Though the most common type of closely held business is a close corporation, even sole proprietorships, a business owned by a single owner, can be closely held. Actually, any type of business entity can be closely held, as long as it has a small number of owners and its stocks are not traded on the public market.

The advantages of a closely-held business

On the other hand, because a closely held business is most often family-owned, personal interests and relationships are more likely to influence company decisions, sometimes improperly.  This, of course, would not be true with a public corporation because the investments are made on an impersonal basis.  Another disadvantage of a closely held business is the fact that the possibilities for expansion may be fewer.  Luckily, as your business begins to grow and change, your organization can always be restructured.

If you have questions regarding closely held businesses, or any other small business planning needs, please contact the Schomer Law Group either online or by calling us at (301) 337-7696.